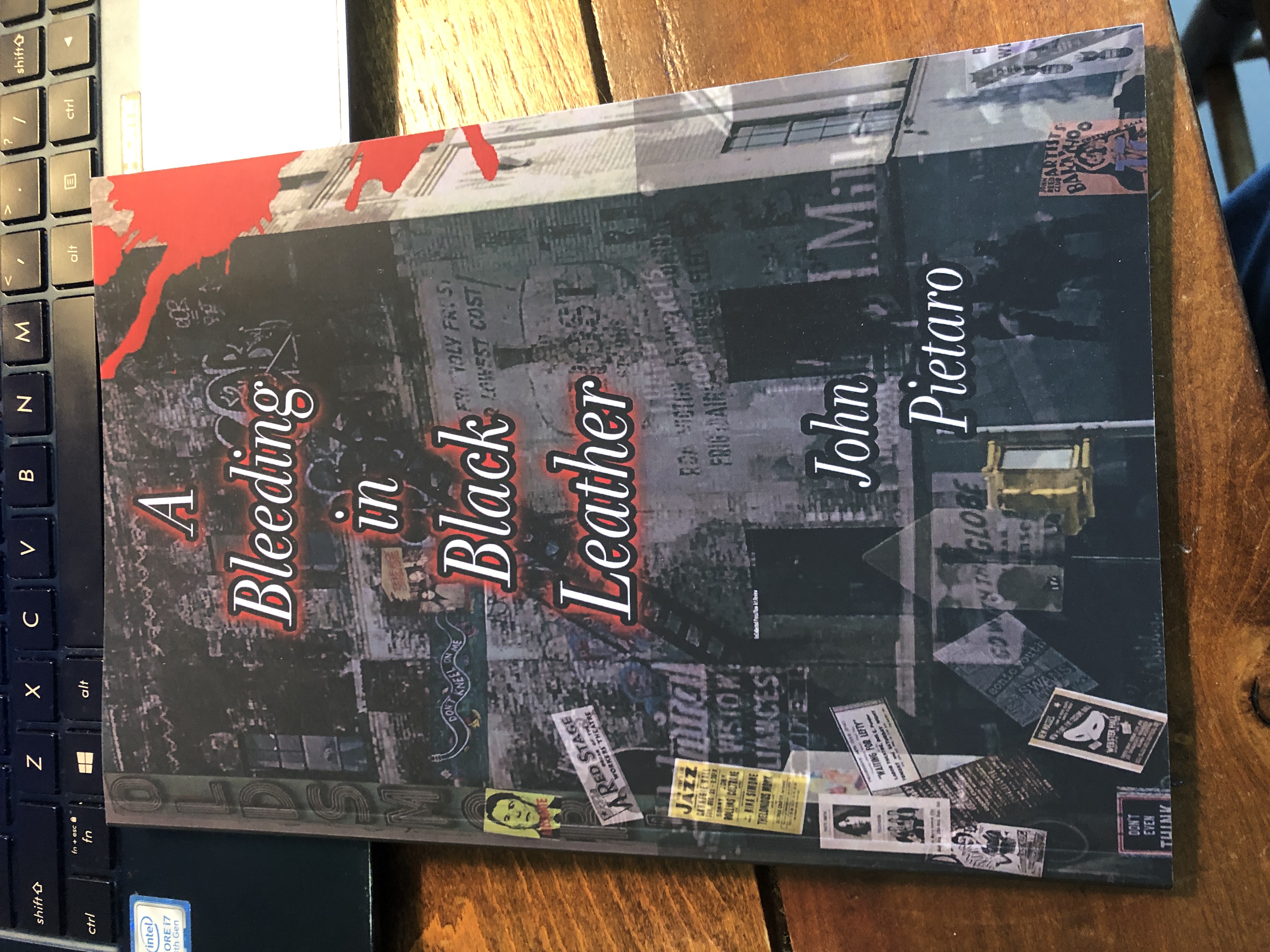 A Bleeding in Black Leather (Uncollected Press/Raw Art Review, 2022) With A Bleeding in Black Leather, John Pietaro takes urban poetry and fiction on a throbbing roller-coaster ride through latent modernism, self-exploration, jagged rhythmic cadences and the raw sounds of music and words. All the while reveling in New York centricity. Here's a collection conceived in Selby's Brooklyn in the bare light of the blue hour.

THE MERCER STANDS BURNING: NIGHT POEMS:(Atmosphere Press, 2020)
In this collection John Pietaro embarks on a foray of verse, one threading standard poetic forms through the revolutionary and the narrative. These works are as drenched in New York's radical core and colorful history as its post-punk, free jazz and spoken word soundscape. 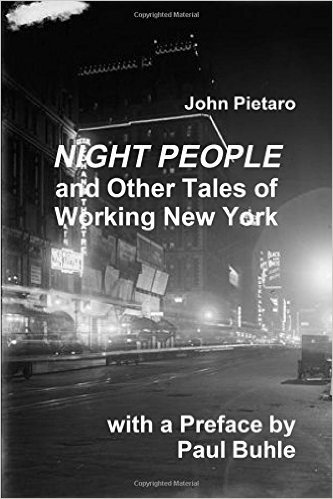 The NYC Jazz Record Celebrated NYC-based print and online monthly covering all facets and styles of jazz. Pietaro has been a staff writer with the paper since 2015, a columnist since 2018. His cover stories, inside features and reviews are plentiful. All back issues are available on the website's archive. 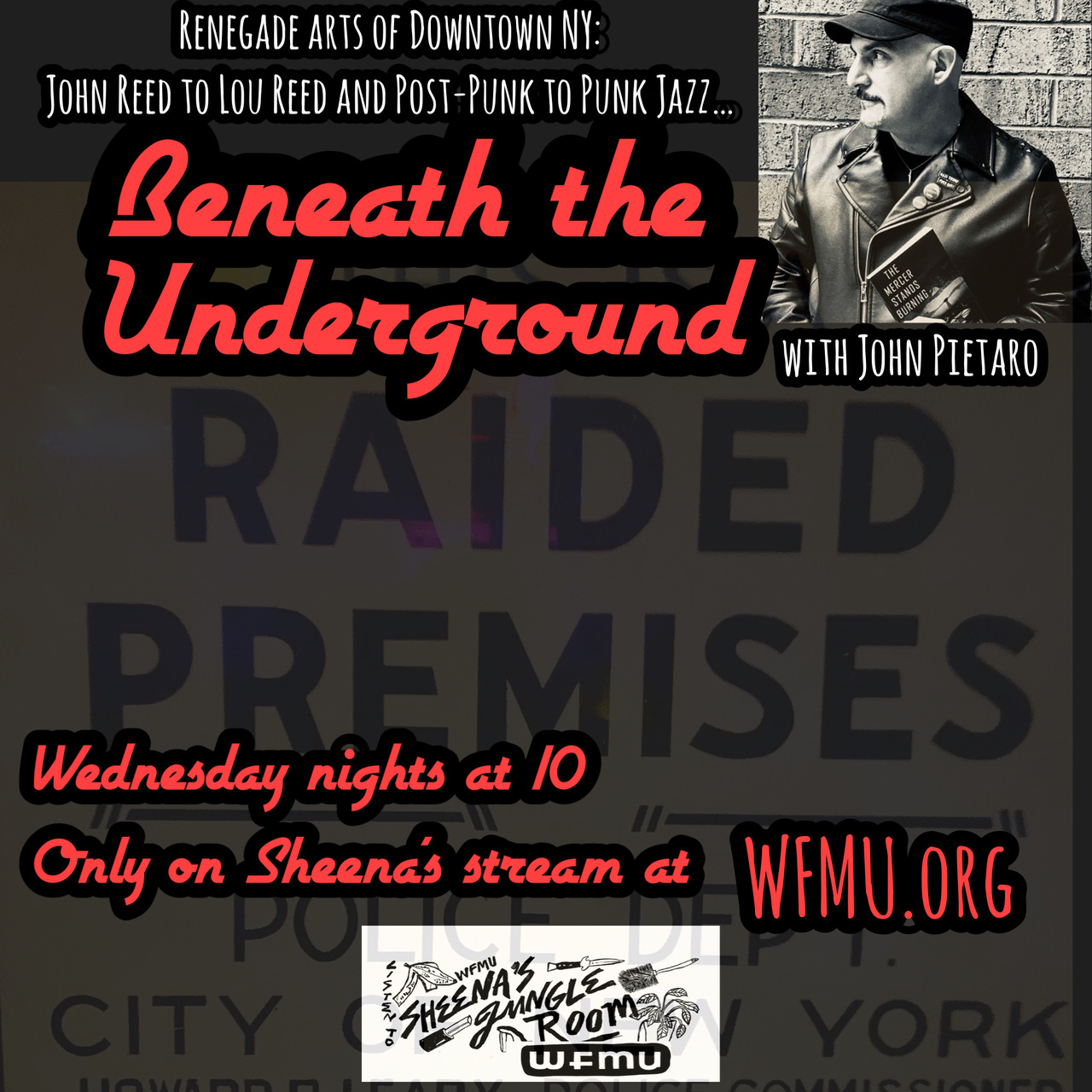 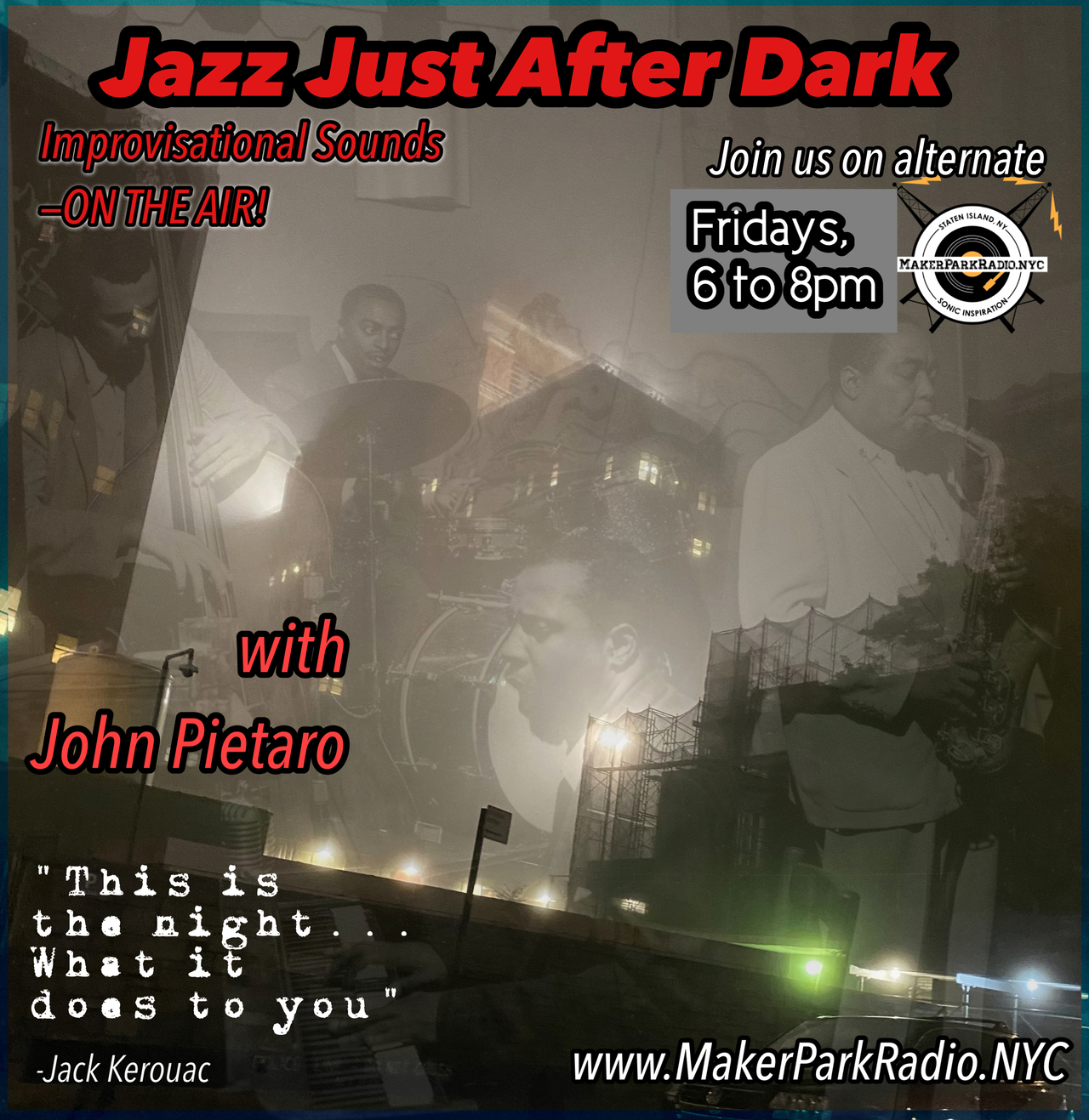 JOHN PIETARO is a writer, poet, spoken word artist and musician from Brooklyn, NY.  His latest work is the poetry/fiction collection A Bleeding in Black Leather (Uncollected Press, 2022). In 2020, his The Mercer Stands Burning: Night Poems was published by Atmosphere Press, and in 2019 poetry chapbook Smoke Rings was launched. Earlier, Pietaro penned contemporary proletarian fiction collection Night People & Other Tales of Working New York (2013) and contributed a chapter to Paul Buhle and Harvey Pekar's SDS: A Graphic History (Hill & Wang 2007). He also wrote multiple entries for the upcoming edition of The Encyclopedia of the American Left (Verso) and is deep into first novel Of Seconds and Shadows.

Columnist/critic of The NYC Jazz Record, Pietaro is a contributing arts reporter to PleaseKillMe, The Wire (UK), Z, Sensitive Skin, AllAboutJazz, The Nation, The Village Sun, Counter Punch, People's World, TruthOut and others, and his poetry or fiction has appeared in numerous international anthologies and journals. He was among the honorees at the New York Press Association 2021 "Better Newspaper" awards ceremony for his obit of drummer Deep Pop in The Village Sun.

Pietaro founded the Dissident Arts Festival and Brecht Lives! Festival, hosts radio shows 'Beneath the Underground' (WFMU.org), and fronts post-punk jazz/poetry ensemble the Red Microphone, recording artists of the ESP-Disk label. The band's latest album, A Bleeding in Black Leather was released in 2022. And I Became of the Dark was released the year prior, and previous to this, the Red Microphone collaborated with poet/activist Amina Baraka for Amina Baraka & the Red Microphone (2017). Ms. Baraka also performed Pietaro's "Her Side of the Road" as a dramatic reading in 2018.

"In 2020, I described John Pietaro's The Mercer Stands Burning as a love poem to the muse and to NYC itself. One foot out of the pandemic, A Bleeding in Black Leather is part punk rock dirge, part jazz symphony, paying homage to the lost and to the living treasures. Sonny stands at the bridge and Selby's Brooklyn "surrounds Manhattan like a fallen idol." The last lines are, I hope, a segue to the next installment: "So smeared, the rainbows of ink…saturation to the vivid""

--PUMA PERL, rock-n-roll poet of the Lower East Side, resident poet of Chelsea Community News, she leads the band Puma Perl & Friends. Puma's latest publication is Birthdays Before and After.

This groundbreaking collection by John Pietaro is all New York. At night. These amazing poems and tales are influenced by the Beats, punk and jazz –but Melville remains very much alive in these pages, too. A Bleeding in Black Leather is the continuation of great art.

--RON KOLM, poet, editor, founding member of the Unbearables, and downtown archivist of the NYU Library. His latest book is Swimming in the Shallow End.

Damn—John's drawing us in again with well-wrought words—this time A Bleeding in Black Leather...the Big Apple's the backdrop! Props!

"The Night Leonard Cohen Died" reads like a literary documentary reel. A truly poetic cinéma verité. But in all of A Bleeding in Black Leather, John Pietaro is constructing his own New York myths. These stories are all physical graffiti verses gathered over the years inside the writer's block; pun intended. Reading John's lines I think of Scorsese's movies, I hear Al Pacino swearing on the phone from Miami, and I can just perceive the film camera zooming high out, and looking down at the mean streets.

"I've read Smoke Rings with great pleasure. Beautifully made, deeply evocative of a world I know well and cherish"

"John Pietaro defies the disappearance of the proletarian writer. He is one, improbably, right now. Like Nelson Algren, whose prose his sometimes resembles, his triumph is to not turn away"

"I received The Mercer Stands Burning several days ago and have been working my way through your poems. I wanted to write to you nearly right away, but still find it hard to describe the wonder and strength of your poetic voice. Your imagery blows my mind. The tightly knit and subtle development of personal with socio/political is unique. As wonderful poetry, it breaks into an otherwise inexpressible consciousness."

"John Pietaro's words are soul cries, and observations, from a Real Human longing for light...like the moan of a saxophone in the NYC pandemic isolation night! Blessings, Poet Brother, on Your Excellent Book!!!"

--BILLY LAMONT, poet and spoken word artist, has engaged in collaborations with rock musicians, released several albums and poetry collections, his latest is Ripped from a Soul Still Bleeding

“John Pietaro's poetry is infused with power, passion, and poignancy. At times glaringly gritty, then sensual and surreal, his work is as hot as a smoky jazz club, as cool as a Coltrane solo.  In "The Poet's Constellation," Pietaro writes "The Words…The Words…Daring to bring on the written revolution."  It's a revolution he is leading. Like Hemmingway, he sits down at a typewriter and bleeds"

--PATRICIA MARTIN, author and poet, Woodstock NY and Torrington, Connecticut where she founded the Speakeasy coffeehouse.

"Pietaro's perceptions as a music critic are really incredible. I'm only glad he has the ears to hear and the eyes to see!"

The Flames of Discontent: 'Revenge of the Atom Spies' (2007)

--Literature as a weapon of social justice is at the core of John Pietaro's arts philosophy. A primary influence remains the work of 1920s-60s Left writers, auteurs of literary fiction, poetry, essays, theatre works, reportage and screenplays, as well as New York's downtown avant garde and punk movements of the '70s and '80s that forged a new day-- 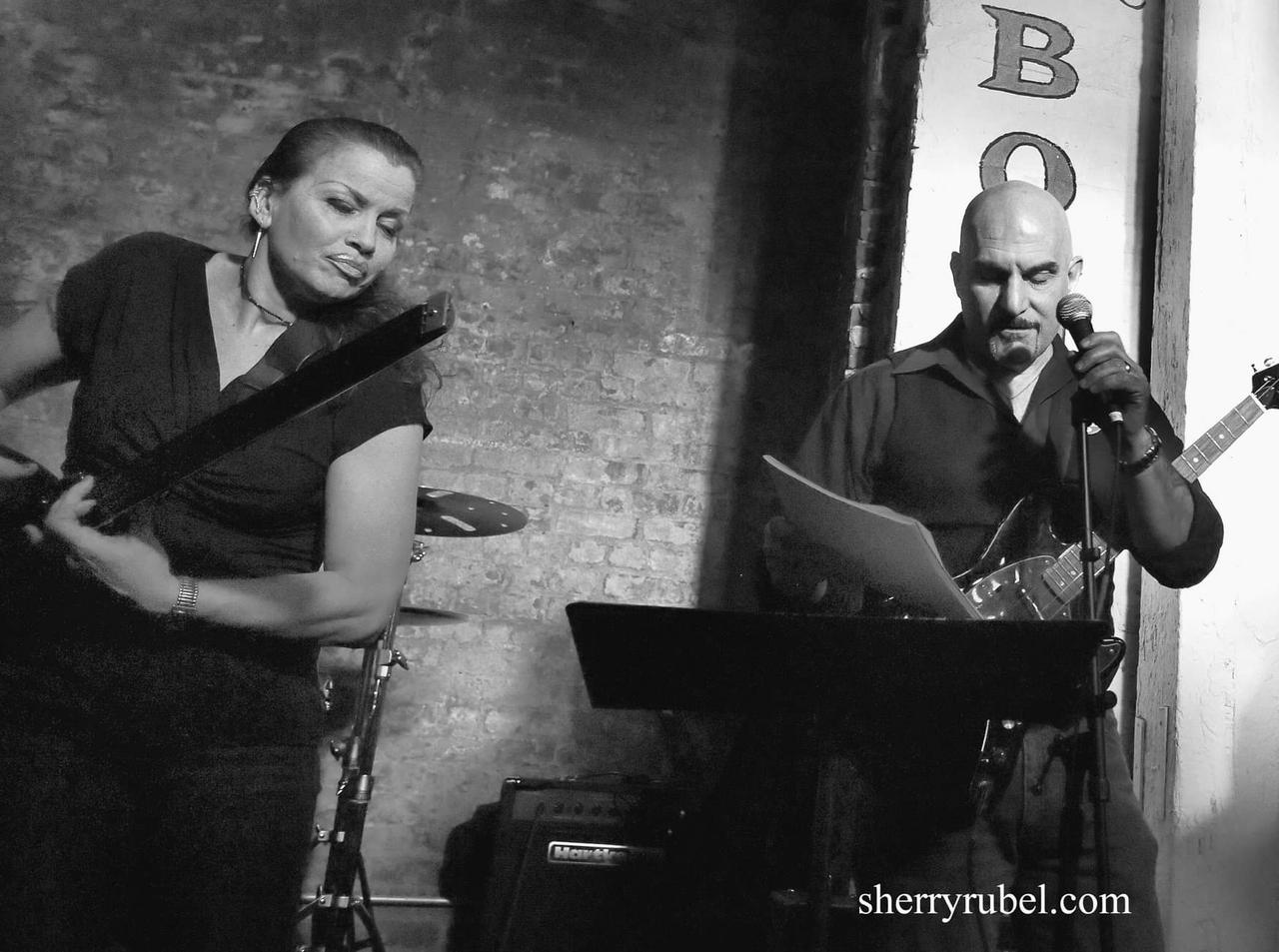 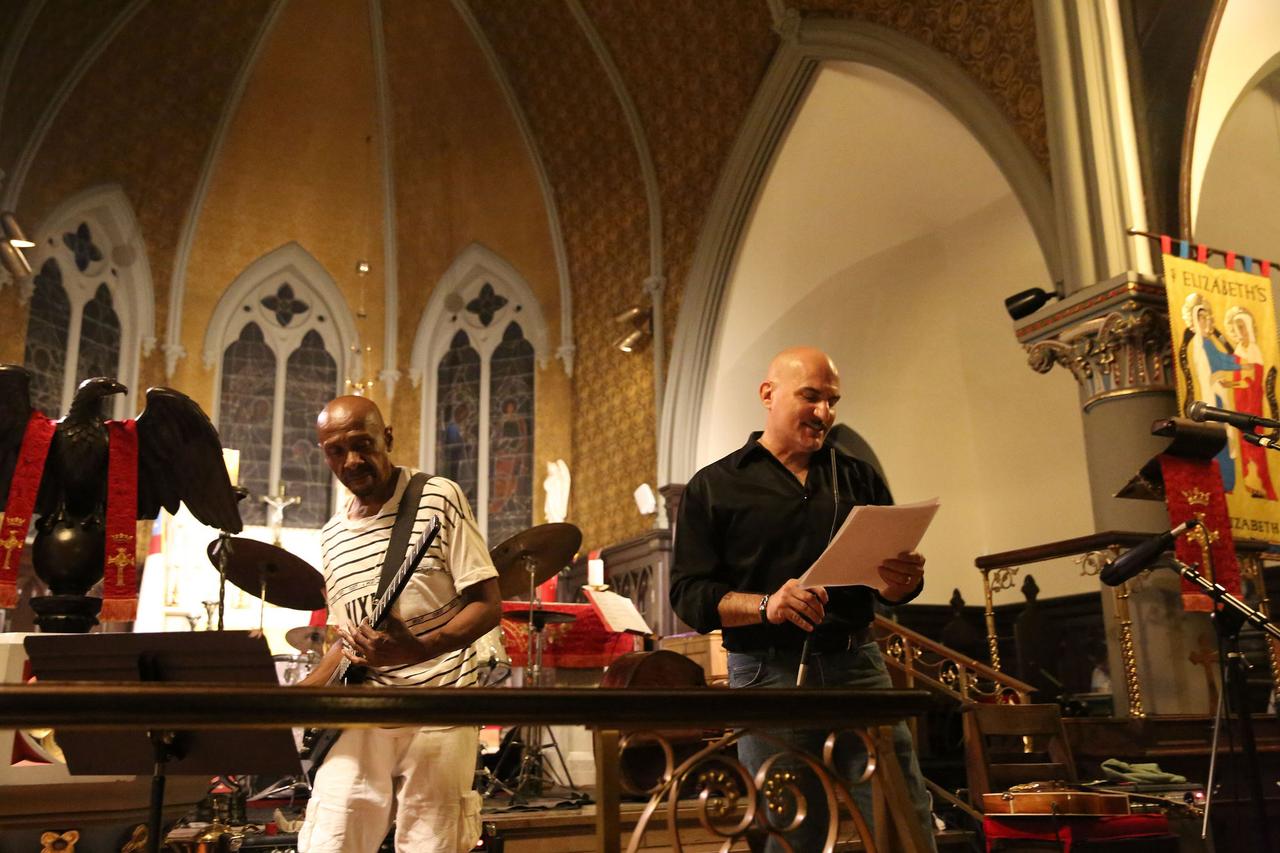 Night People & Other Tales of Working New York
A collection unashamed to be called 'contemporary proletarian literature'. Preface is by historian Paul Buhle.